Remote Training Success in DRC: It’s All In Your Mind 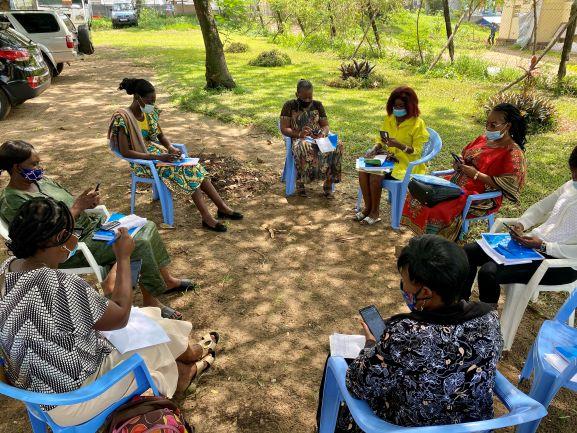 NOTE: This is not another article about that perfect IT equipment, nor is it about the silver bullet software or app that promises to rapidly and cost-effectively scale your impact. This is about the first and fundamental step toward digital success, our own mindsets. Our mindsets will drive or block our efforts, regardless of hardware, software, and connectivity.

When Pierre was approached by Shani Turke at Performance Monitoring for Action (PMA) in April of 2020 about holding a remote training for his Kinshasa- and Kongo Central-based resident enumerators, to mitigate the COVID-19-related risks of the planned in-person training, he was rightly skeptical. The typical PMA DRC interviewer, or Resident Enumerator (RE) had on average limited tech experience and even less comfort with internet-based tools. As for Pierre, the principal investigator at PMA DRC, not only had he never designed or led a remote learning event; his experience even as a remote learner was very limited.

Thinking back on this initial phase with Sarah Nehrling, an organizational learning consultant working on remote learning with PMA, he remembered his reticence. "I was not for it, I was not willing to do it. If already I didn’t have much experience as a learner, how could I train others?"

In DRC, while growing quickly, internet availability, literacy, and accessibility are still very low. According to the DataReportal report from February 2020, only 19% of the population connected to internet in January 2020, with only 3.5% of the population active on social media. Throughout 2019, “Google” was the 12th most common query that people entered into the Google search engine. And with 1GB costing 26.2% of a person’s total income in DRC , it’s no mystery why there aren’t more individuals spending more time online.

And yet, Pierre and his team ended up leading a very successful remote enumerator training. Twenty-five enumerators and five supervisors participated in a 3-day semi-synchronous training, following the training plan and platform that Pierre and his colleagues co-developed and piloted with Sarah and Shani. They received step-by-step instructions for each training session in a main WhatsApp group, along with links to where to find the video, activity sheet, or quiz for that session. They asked and responded to questions in another WhatsApp group, and they could connect with their small working group for more personalized questions, support, and activity partnering in a third WhatsApp group. At the end of the remote training, the enumerators' test results were just as good as during previous in-person trainings, and their phone call-based data collection once again provided high-quality and rapid-turnaround data, as is PMA's mission and reputation.

Pierre suggests that, despite the typical emphasis on infrastructure and materials, technology access and connectivity are likely NOT the first obstacles to holding our trainings online in LMICs in 2020 and 2021. Our own mindsets, particularly a fear of innovation and trying new things, are the first and most challenging obstacles to acknowledge and overcome.

As you begin to build out your plans for 2021, full of uncertainty about what type of learning will be possible, Pierre has some advice to help you and your teams make the transition to a learning-centered and tech-friendly mindset that will enable you to embrace and elevate the opportunities for remote learning in 2021.

4 Ways to Have Online Training Success in 2021

1. When the world evolves, evolve with it - thoughtfully: This year may have made us all think differently about remote collaboration and learning, but the basic technology that allows it has been around for over a decade. The technological evolution is like a passing train: when it comes by, either we get on it, or it leaves us behind.

Of course, blindly adopting technology can be a recipe for disaster. Pierre's initial reticence about remote training was valid, and he knew he had to test the remote training system for himself before even thinking about involving others. So he and his team underwent a pre-test, playing the roles of trainers and learners in the system, which was built around a structured use of WhatsApp and Google Drive. "Our response was, 'yes, we'll do this, but we reserve the possibility to turn around', based on how the pre-test went." Throughout the pre-test, they were driven by a curiosity to learn this new system and to evaluate its feasibility for their learners.

They saw that the videos and materials were clear and visible, and that the offline options safeguarded against the inevitable challenges of low-bandwidth and unreliable internet. And, with this successful pre-test, they launched into preparations!

2.    Lean into adaptation and reactivity; they are necessary for these uncertain times: NOW is the time to adapt and react, as we do not know when or if things will go back to normal, and we cannot simply sit around and wait. Pierre and his team weighed their immediate options: do they risk everyone's health by holding an in-person training? Or do they attempt the remote training to provide at least some instruction in a safe way? They also considered the longer-term implications: Do they want to assume that they will be able to return to safe in-person trainings in the near future? Or do they want to begin to prepare their teams now for what might be a long stretch of time without these in-person trainings?

"We told ourselves that we can't really move around, so we need to adapt now in order to keep working, to be useful in a situation where conditions mean that we can't move." In adapting and reacting to the current situation, the team designed and discovered new things that will continue to serve them, far beyond this pandemic.

For example, despite their best efforts, some enumerators would inevitably arrive late during in-person training days, because of unpredictable events at home or, most often, major traffic jams on the way to the training. The remote, semi-asynchronous training allowed women to manage their household responsibilities, avoid traffic altogether, and always be on time. The gain of not having to travel and the flexibility of the semi-asynchronous structure allowed women to learn on their schedules, without missing content, and without being late.

3.  Plan well, because "failing to plan is planning to fail": This adage is doubly important when it comes to trying new things and leveraging new or internet-dependent technologies. Take time to think about every single obstacle that your team might encounter when preparing and leading an online training, and reach out to people with relevant experience for advice and support. With their fresh and formative experience, Pierre and his team, along with their enumerators, are happy to be amongst those you reach out to for advice.

For their remote training, it was clear that the ability to access the majority of materials without an internet connection was crucial. By using Google Drive's offline sync option, a new feature for them, they were able to sync materials to all smartphones before dispatching them to enumerators. "The internet connection was a huge barrier, but a barrier that we could overcome!"

While Pierre and his team opted into the remote training format, he knew that his enumerators had less of a choice if they wanted to keep working. While some enumerators were already active on social media, others had never even used WhatsApp, the app that would constitute the central space for the remote training system, through different designated groups for sharing content, asking questions, and working with others.

The enumerators needed a bridge to this new remote system, something to help them feel generally comfortable with these tools before they were expected to use them to learn. Pierre created a video that explained how the training would be run and what would be expected of them, including reassurances that WhatsApp was not so different from the SMS system they already used and that the training team would be available to support them. He then created the large WhatsApp group of all enumerators, invited everyone to join, and shared the video through WhatsApp. On the first day of training, to ensure that the enumerators were present and able to access and look through the WhatsApp exchanges, he asked them to all send photos of themselves to the group; quickly, the group space was filled with photos of enumerators, sitting in their homes with their smartphones and field manuals!

Once they were put in a situation of remote learning, the enumerators also learned about how to be strong remote learners. Not only did they become familiar and comfortable with WhatsApp and Google Drive, they also learned how to organize their learning tasks around other responsibilities, how to reach out to fellow remote learners and supervisors for help, and even how to record and share their summaries of what they learned that day. The enumerators were proud of themselves for being successful in this new opportunity, and Pierre was glad to have dared to bring it to them.

"People are naturally scared of what they don’t know", says Pierre. "And so sometimes they'll be hostile about innovation, not everyone is ready to adopt innovative approaches. You need to help them to understand the advantages and the risks. And once they've seen it, they can become big fans. But first, you need to dare to try it."